For those that are old enough to remember the first days of the mainstream use of the internet, having a personal website is nothing new. During those days having a primitive website not only was probably the only way for manifesting our presence throughout the web but because of the initial scarcity, personal website were a substantial part of the global content.
Very few were good, but most of them was fun and almost all of them interesting. The personal touch was obvious everywhere. Everyone was a web designer even if very few had even basic skills. Those first websites were usually hand coded without any database to separate and manage the content from the frontend, so they were exponentially difficult to update and maintain the more content was added. Most were hosted on university servers (that perished after graduation), or on free webhost with huge urls that also vanished along the way (the demise of geocities must be the most famous one).

The rise of personal blogs gave a new life to personal expression on the web but this time the format was much more restrictive, and that also reflected on the content. Websites switched from ‘who am I’ to ‘here’s what I have to say’ which was good and bad, good because the new format allowed for a much more extensive expression, bad because it narrowed the spectrum and many things (the most peculiar niche and maybe more interesting ones) were left behind.

Along with the appearance of blogging the forums and message boards that existed since the very first days of world wide web became more mainstream, and maybe too mainstream. A web forum is a very specific medium, great for specific tasks, but very restrictive for others. By lack of other means, they became extremely widely used and in a matter of a few years the limitations became not only apparent but created a toxic climate that in many cases spill over from the web to the actual society. Forums were (and still are, even as a shadow of their former glory) a precursor to social media, that at 2007 swept away both the internet and society.

Every good or bad aspect (usually both simultaneously) of social media can be traced or at the forum domination era. A very substantial change occurred when people switched their focus from personal websites and blogs towards forums (and even more so in social media). There was a tradeoff that was mostly overlooked, people traded the control over the content they created for the ability to directly interact with others. People spent and are still spending a huge amount of time and effort on forums and -mostly today- social media content creation. They upload photos, they write posts, threads, articles, they comment, they react, but all that is as beautifully said on Bladerunner by Roy Batty ‘like tears in rain’, content that, important or not, trivial, or painfully crafted, is lost in the vastness of todays social media landscape.

I may exaggerate because there are tools to retrieve and revisit most of it but it is always like searching through someone else’s library and notes (because that’s what you are practically are doing).

it’s 2022, why it is important to have a personal website?

Well, it’s not necessary to have a personal website but it definitely helps with almost anything that you’re doing professionally or not.

The most important benefit is having a central place where someone can find your contact details, whatever basic information about you, and all the correct links for your social media or projects. This sound trivial but it’s quite important. It can serve as an elaborate business card that you can customize or expand along the way. It’s also very helpful for your social media accounts, not everyone has consistent usernames across all platforms nor distinctive ones. This central place can help anyone that wants to follow you, to do it easily on the correct accounts. The more famous or unclear to stand out your name is, the more important this can be.

If you want to expand your website with a content management system like a blog, even a simple one, then this can be ideal for owning your content. Take some extra time to either posting primarily to your website and then share it on social media or even the opposite. As the time goes by, you’ll have a library with your posts, articles, opinions, photos etc. that you can organize as you please and present it as better as possible. Otherwise, your effort will be spread (and lost) among forum posts, facebook comments etc. You can even do it retroactively, if there’s a topic that you have covered in the past, either on a post or through commenting or inside a twitter thread, you can search these elements and recreate it as an article.
Both those things are extremely important from a personal branding perspective but that is something beyond the scope of this blog post.

I launched my first personal website in 2000, shockingly enough, 22 years ago more or less. This is a distant descendant of those primitive websites, coded in Netscape composer with graphics made at photoshop 5.0. All these websites served the basic function described as contact point above, with wild aesthetics that ranged from extremely flamboyant to almost notepad like minimalism. Apart from basic contact info they usually included something like a portfolio, even though design was just a hobby back then. They also had some articles; a few university project files and stuff like that. I have every version and all the files, so some day I may upload a complete timeline presentation.

Not a long time after the launch of my very first own website, like most people active on the internet at the time, I started participating in forums (and eventually co-creating and managed a few along the way). That’s when I started creating content that was quite elaborate and not just simple posts for casual discussions. This was the main motive for starting my first web portal for engineering topics. The website was robotpig.net (still online today) which was quite successful, especially during the time that it was active. Also, at some point design became my profession so I launched a dedicated website for it, velocityfarm that evolved through the years to its current form. 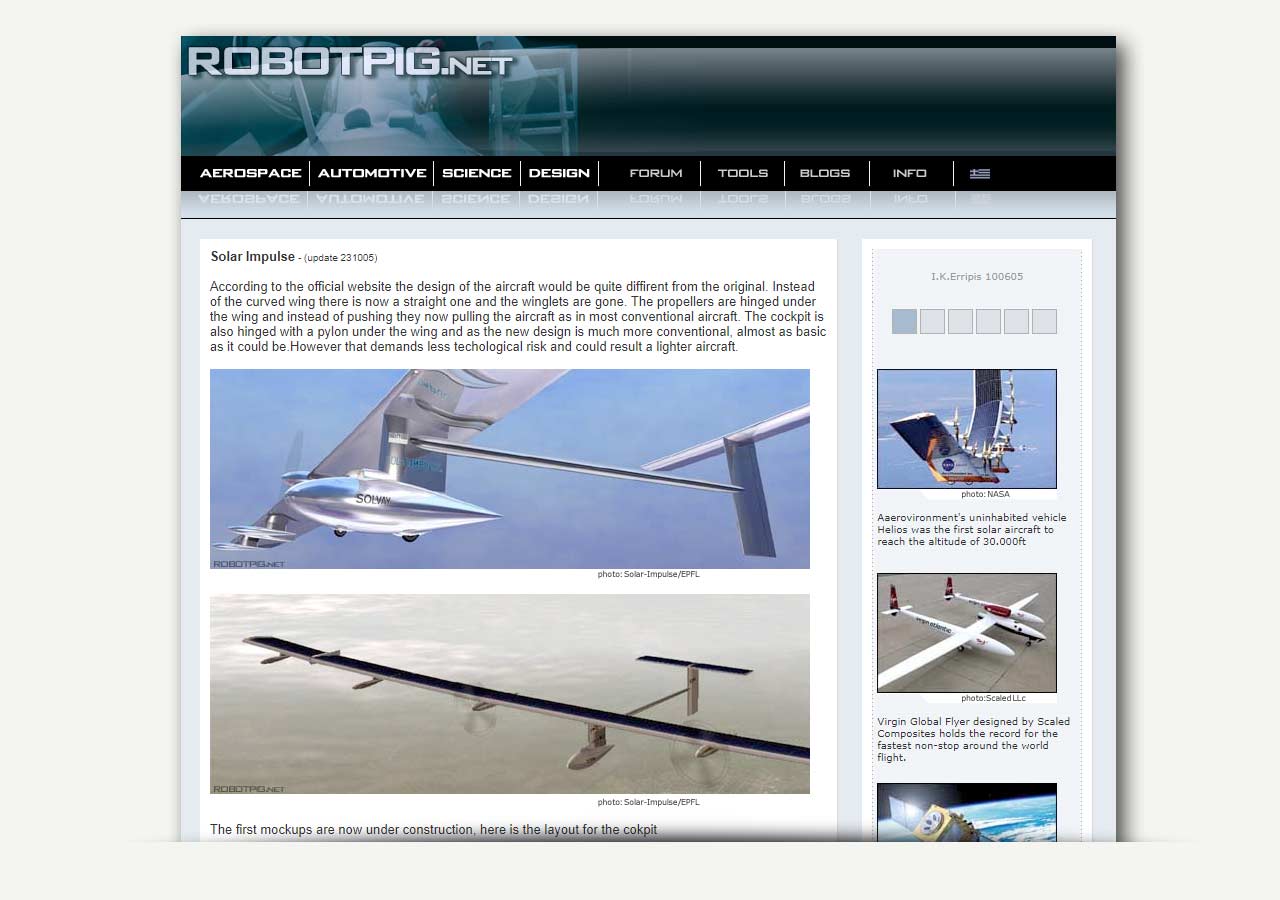 The last 10 or so years I followed the path of least resistance because blogging never was a priority. robotpig became inactive (largely because of my participation on Robohub, of whom I’m a proud member until today) but I continued to be very active through its social media, under a new (much more appropriate) name, MechDesign.xyz. The upside is that those accounts and channels are quite successful (at least for my standards and the effort I put in them), the downside is the obvious, robotpig remained static all those years. Additionally, even if the subjects covered were wide enough for a portal of this type, they couldn’t cover whatever I was interested in. As far as graphic design, I attempted to add a blog to some versions of the velocityfarm website, but apart from a couple of posts I never pursued it. So, what’s changed now?

I frequently (and to the annoyance of my friends) mention Chris Do, a person that I greatly admire. He once said (I’m writing this by memory, couldn’t find the exact quote):

“Every company is a media company, some know it, others don’t “

I believe that’s true, that’s why I made it a personal goal of mine to try and create as much content as possible and publicize updates and insights on the things I’m working on and even thoughts and remarks. That’s as wide as anything, so I put a lot of thought on how to do it efficiently and effortlessly enough. So, here’s my plan and feel free to hold me accountable to it in the near future!

I should have started by this website, but it was easier and it made more sense to start with the blog of velocityfarm, my main work and profession. This is the place where I started publishing work updates but also some more extensive thoughts and insights (here’s one). The focus is always on graphic design and design related matters and always under the scope of my agency’s point of view.

Second one is this blog. The content here is a bit obvious if you read this far. It’s about my personal updates and insights, and generally stuff that don’t fit anywhere else on the platforms I’m planning to use. I also aspire to reconstruct some scattered thoughts initially posted on social media, that I believe have substantial value to become a stand-alone article. This will also be a home to any random projects, like ‘erripis.daily’ a daily project I started this year (already more than 100 posts!).

The next one will be the re-launch of MechDesign.xyz as a portal with similar subjects to the old robotpig website. This will not be a news page; it will only cover issues that I personally (or any collaborators) find interesting. Hopefully it will have some interesting content (robotpig was quite successful after all), in-depth articles and it will be accompanied by video or other mediums apart from its web form.

There’s also the arrivato notebook, a blog about travel, holiday accommodation and other related subjects, that reflect the activities of arrivato, a property management company I co-founded.

I have some other projects in the works (maybe too many) but that’s the plan for now.

I admire anyone who read this far, I hope you find this big first post interesting. Until the next time (soon hopefully!)